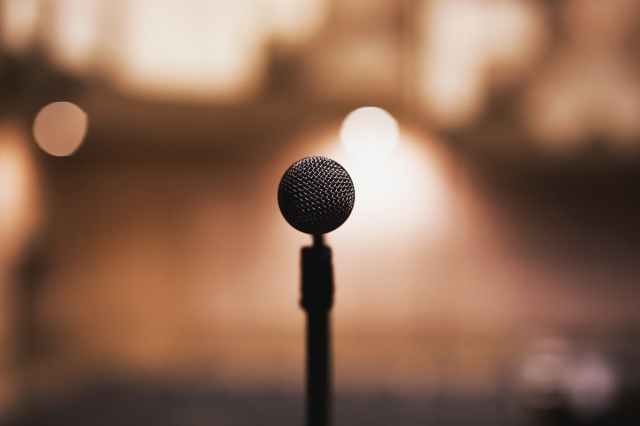 Photo by freestocks.org on Pexels.com

So there was an open mic night the other night. My new job sponsored it. It was meant to encourage anyone who’s written anything to get up there and read it aloud to those who attended.

It made for an interesting evening.

Whenever you hold events such as these, you attract a group of people who are flattered by the idea of sharing the written word, but not theirs. Yet they come anyway.

The doors opened a half-hour before the event started. In wandered a very distinguished looking artsy-type, a very tall man wearing a black outback hat and motorcycle jacket. He appeared somewhat serious but with a twinkle in his eye. He bent over toward the entry desk I sat at, and almost whispered, “What’s going on here?”

“A spoken word open mic night,” I said. “Are you interested?

He stood tall and let out a laugh. “No, I don’t have anything to say. But it might be interesting to hear those that do. I’m more or less a reader.”

As if on cue, a woman walks in, letting out a delighted gasp and smile. She says the man’s name and they hug.

“This is my favorite librarian,” he says.

“Glad you could make it,” I say as I shake her hand. I’m guessing she told him to meet her there. The two find seats as others filter in.

I see a rather handsome man my age come in. Also tall and in a leather jacket, he sticks out his hand and introduces himself. Another artist, a photographer. I make a mental note that so was my ex, in his spare time, that is. And are black leather motorcycle jackets de rigueur for artists? (Confession: I have one too.) He’s funny and we share a few laughs, then he, too, settles in a chair to await the beginning.

Some of our board members filter in, choosing to stand rather than take seats. Others pass by the snack table, covered in such nutritious offerings as Doritos, Scooby-Doo Bones, Cheez-its and Kool-Aid pouches (hey, I didn’t buy the snacks).

The MC hops up to the front of the room, announcing the event’s beginning. He goes over the rules (“Seven minutes, and the red light flashes at six”). Those of us brave enough to share our works put our names in a cup. I kind of told someone that I’d go up if he did. He thought I was joking. Of course, he was picked first. An awkward moment ensured. He hadn’t prepared anything. Neither had I, actually. But my boss yells out a suggestion and he ran with it. Good!

I’m still fiddling for ideas (I hadn’t prepared anything either) and brought up this blog on my phone. I fiddled through a few entries and settled upon this one. To me, it made sense. Wrote it at a point in the recent past when I struggled, yet saw the way out of my tunnel of supposed failure.

My name’s called. I’m second? Whew! Pleased I found something in the nick of time, I stand in front of the mic, putting my glasses down on the amplifier. Glasses are useless for reading and without them, the crowd’s ever slightly blurry. Adds a bit of surrealism.

Words come easily, especially when they’re already composed. The crowd gives a big laugh when I say, “Divorce and menopause don’t mix.” Then I give an account of my failed marriage in less than the time allotted. After it’s over, everyone gives a large round of applause and I step aside.

Later, my boss and a board member approach me. “You were the best one out of all of them.” She gives my arm a squeeze.

“I didn’t know that about you,” said the board member. “You were pretty brave to stand up there and say all that.”

After a few amazing recitations from rap artists, the evening ends and we clean up. It’s still early and those who remain talk about heading over to a museum opening across the way. I want to go, but suddenly I’m beat. I beg off. Next time, I promise.

As I drove home, there’s still a glow from baring my soul in front of a crowd. It does take guts, for sure. But I felt lighter for having done so. Not only sharing my art, but my life.

← The Shadow Self
A Great Wave Washes Over →
Follow Confessions of A Middle-Age Woman on WordPress.com